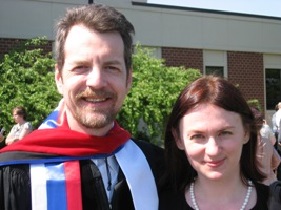 I was raised as an atheist since my father was active Communist and my mother – nominal Christian.

The iron curtain broke down in the beginning of 1990-s when I, together with many Russian people, started to question atheism, since it was obvious that Communist propaganda was mostly a lie. At that time for the first time I came to the Orthodox Church and even was baptized there. I also purchased my first New Testament and read it (Bibles were illegal in the USSR before Perestroika).

Unfortunately, I didn’t find any friends in the Orthodox Church and even was somehow disappointed, since it was obvious for me that if God exists, there must be some supernatural manifestations of Him – the way it was in the New Testament church.

By that time one acquaintance of mine invited me to the Pentecostal church. I went and two things grabbed my attention – people were friendly and open to fellowship and secondly I heard them speaking in tongues. It is written, “Wherefore tongues are for a sign, not to them that believe, but to them that believe not” (1 Cor. 14:22). This was my case- I realized that something real and supernatural is going on in that church and wanted to know more.

Then I met Pastor Alexander Fomin (recently he passed to be with the Lord). His love and testimony was very powerful. He was God’s instrument to glue me to the church. Alexander used to be a bad criminal and was saved in criminal prison where he served for 10 years. It was hard to believe, because Pastor was one of the nicest and most loving persons I’ve ever met. Today I realize that Pastor’s testimony of the miracle of his radical transformation through the power of the Spirit really convinced me that living God not only exists, but also is still in the miracle-working business today. At that point I surrended my life to Jesus.

Soon afterwards Pastor Alexander planted a new church in Moscow where I became his assistant.

Then under his leadership during two years I was involved in church planting in Drezna and Orekhovo cities. In 1995 another church was planted in Khimky city where currently I serve as the pastor.

I received wa Dmin degree from Asbury Theological Seminary in 2007 and since then was involved in teaching ministry. Currently I am a teacher in two Moscow Seminaries. Also I hold Bible Seminars in various cites in Russia.

In 2006 the Lord gave me the vision of planting a Rehab ministry for the addicts, which we did by the grace of the Lord. Currently we have two Centers – one for rehabilitation and another for socialization. More than 400 people received help through this ministry. Dozens were saved, several families formed of the people who previously were destined to perish.

In 2012 we planted new development of our  ministry – ministry in orphanages. We helped hundred of kids both physically and spiritually. Several of them were adopted by our volunteers. One of them – by my family.

You can learn more about Orphans ministry here:

The Lord blessed me with one wife and three wonderful children: Victoria (1996), Timothy (2001) and Mathew (2010). There is a good span between them. In 2014 we took Viktor – a boy from an orphanage with minor mental problems.